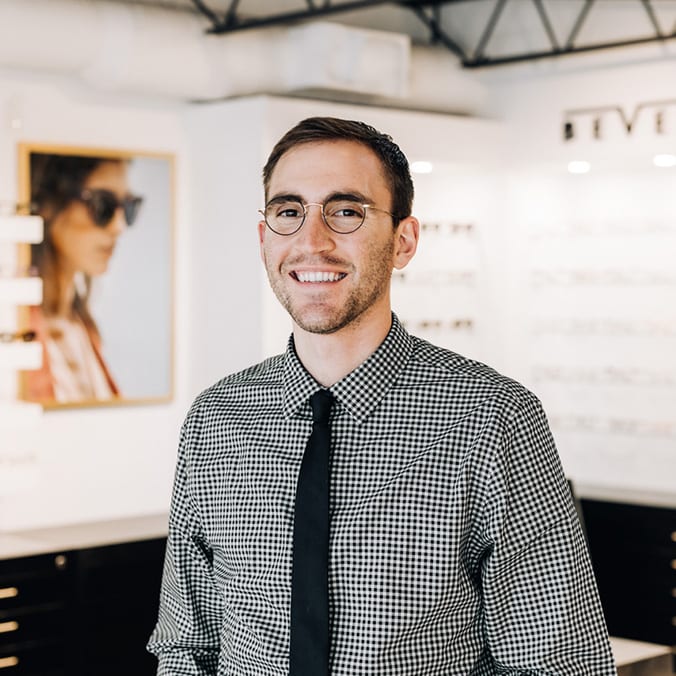 Dr. Hollenbach is originally from Columbus, Ohio. He attended the University of Miami in Coral Gables, FL and graduated with a Bachelor of Science with emphasis in biology, chemistry, sociology, and Greek & Roman literature. After Miami, he attended the New England College of Optometry.

Following his graduation from NECO in 2014, he returned to Columbus to complete his residency in ocular disease at Erdey Searcy Eye Group. During his residency, he gained specialized training in managing post-operative patients, including cataract, corneal, refractive, and glaucoma surgeries, as well as challenging red eye, cornea, uveitis, retina, and glaucoma cases.

Dr. Hollenbach has been a Fellow of the American Academy of Optometry since 2019 and is a recipient of the F. Dow Smith Award.

He met his wife, Dr. Kate Hollenbach, while in optometry school. She is also a practicing optometrist and the Eye Clinic Director at Open Cities Health Center in St. Paul. They currently reside in Edina and love spending time with their boxer puppy Pepper, exploring new cities, playing volleyball, and obsessively waiting for the arrival of each new Marvel movie.